10 Ways To Get Your Kids to Eat Vegetables 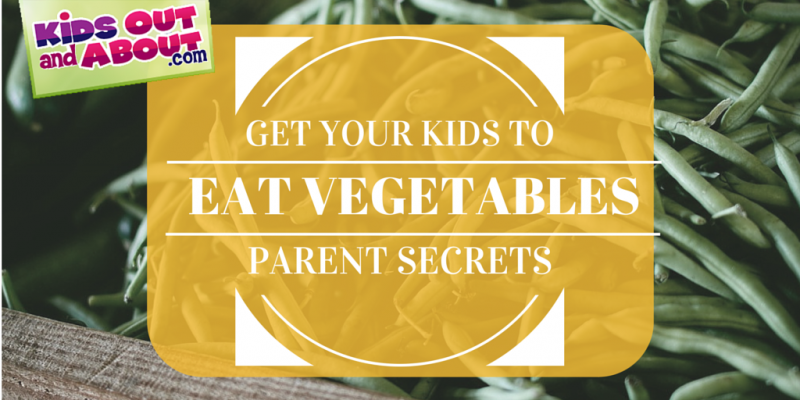 Trying to get your children to eat more vegetables? Here are some techniques I’ve used that have worked for our family.

Ellyn Satter, nutritionist and author of Child of Mine: Feeding with Love and Good Sense, advises not saying things like “You have to eat two bites of peas before you can have dessert.” Because that sends the message to kids that they have to go through the chore of the yucky, stinky peas in order to get the valuable reward of dessert. If you’re early enough in parenting to follow this advice, it works pretty darn well. My favorite example is the time when my girls were 5 and 2. They asked for dessert and I answered honestly that we didn’t have any. They went into the kitchen and soon I heard them laughing uproariously. They had outsmarted me, found dessert, and started eating. What was the dessert? Carrots. I smiled and conceded defeat.

Along with this, when we’ve served dessert, I usually leave the vegetables on the table. My kids have eaten a bowl of ice cream and then gone back to snacking on broccoli while we chatted after dinner.

Even though I do an Academy Award-worthy job of acting like I don’t care if they’re eating ice cream or broccoli, I just rave about my vegetables. Once I happened to be eating salad while J was eating chocolate. J said, “I know you like salad much more than chocolate.” I told her that I like both, but that a big bowl of salad makes me feel good, while a big bowl of chocolate would give me a tummy ache. I didn’t say that I exclaim over delightful salads in her presence while furtively scarfing down chocolate chips when she’s out of the room. That’s my little secret. Or, you know: now it’s our little secret.

My kids love frozen vegetables directly from the freezer. Peas, carrots, corn–they somehow perform a magic spell as long as they’re still Popsicle-style. On more than one occasion I’ve shared this tip at a playgroup, and the disbelieving host mother has pulled a bag out of her freezer. Without fail, a majority of the children start chowing down while their mothers look on, shocked and delighted.

4. Present the same veggies in a novel way.

I think that part of the frozen attraction is its sheer novelty. Novelty works in other cases, too. Artichokes are such an interesting vegetable to eat that my kids instantly wanted to try them. They shun salad, but they’ll both use lettuce as a wrapper when we make our special Asian burgers. New twists on the same old vegetable can make something they previously rejected more appealing or encourage them to expand their repertoire with vegetables that they love. When my oldest was young, I'd try to serve her the steamed broccoli that I liked, but it wasn't until she met raw broccoli at a salad bar that she fell in love. Both of my girls enjoy carrots, so I offer them in all different ways: big ones, green tops and all, sticks or baby-cuts, shredded fine, blanched with rice vinegar and sugar, or cooked in soups.

5. Make vegetables available when the kids are begging for a snack.

We have some form of cut-up or 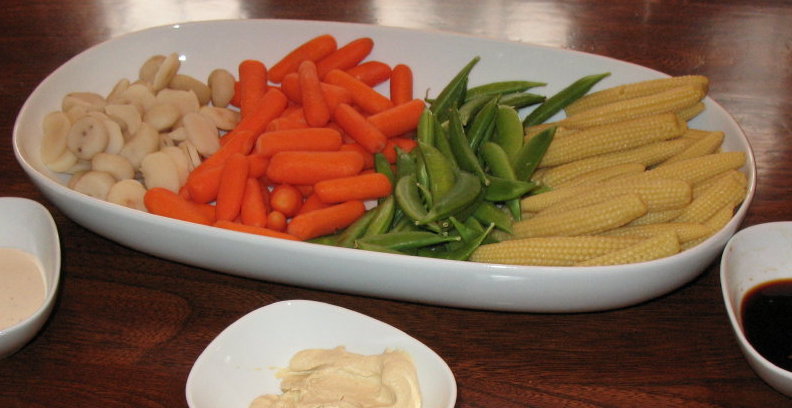 easy-eat vegetable available always, usually in a little bowl in the fridge that’s pulled out for mealtimes. Our biggest hits are carrots, broccoli, cucumbers, and sugar snap peas. When our little friend who likes red peppers comes over I always have pepper strips, because my kids won’t eat them and so I try to use the peer pressure. When I set the table for dinner, I always put the veggies out first. Then my hungry children will eat them while they wait for the other stuff. Generally speaking, my kids aren’t allowed to eat in the living room at all unless it’s popcorn on a movie night. But I’ll make an exception for vegetables, explaining that they’re neater (because I’m still trying to act all neutral about the food) than, say, crackers or chips.

6. Use dips and sauces as "gateway drugs" to the real stuff.

Plenty of parents have luck with the gateway drugs of butter, cheese, and ranch dip. Actually, only butter works at our house. It’s why my 8-year-old has been hooked on artichokes for years (butter + lemon juice + garlic salt = her version of nectar). I hated carrots for years until I tasted them after they'd been boiled like crazy and caramelized with butter and sugar. Gradually I grew to like other cooked carrots and shredded raw carrots.  Strangely, my daughters both turn up their noses at the candy-carrot version I'd loved.

7. Go ahead: use flat-out deception.

I’m not above it. Most notably, there are my fabulous berry & spinach smoothies. Shred zucchini or yellow squash finely and throw it into pasta sauce and no one will ever notice.  I’ve also made chocolate cupcakes with beets in them, and my children were eating them happily until my husband, for reasons unknown, decided to tell them about the secret ingredient. Then they insisted on bringing cupcakes to the playground to trick their friends. A layer or two of spinach leaves in our lasagna looks enough like basil that even my spinach-loathing husband doesn't notice it. There are entire cookbooks filled with sneaky recipes like these if you need more ideas.

My kids will avoid chunky tomato sauce, but crushed tomatoes or a smooth sauce are just fine. Pretty much every kid in my extended family loves our traditional pureed potato leek soup, which we make with an immersion blender. We love our immersion blender. If you're preparing a soup that contains vegetables, you can pause and blend it just a bit, enough so that there are still solid vegetables, but the broth is thickened with some of the puree. Then you can snicker quietly to yourself as your children pick through the vegetables. Sometimes it works the other way, too. For a while my oldest was spooked by guacamole, so we switched to sliced avocado and she ate happily.

Kids are more likely to eat foods if they help raise them. Gardening with children is a great way to get kids excited about vegetables. Some CSAs require or welcome families to help with crops. Children love the idea of picking something out of the ground and eating it right away, so you'll find that the same kids who turn up their noses at lettuce leaves or herbs on a plate will love the idea of tearing off a leaf and nibbling like a bunny. Sometimes for fun we have a "contest" between the grocery store and the farmers’ market produce. UPDATE: For those of you KOAA readers who saw "contest" and thought that there was a super-cool vegetable contest that you'd like to enter, I'm sorry to disappoint you. Please see the newly-added bonus #11 in this article to see what I'm talking about.

Generally, if my kids request any kind of produce, I’ll buy it. Sometimes I’ll even ask if they want to pick out anything in the produce section or at the farmers’ market. But I specify that whatever they choose can’t be wrapped (see, there I go avoiding saying “no sweets”).  And there’s also a limit on overpriced fresh berries. Because, left to their own devices, the girls would spend the college fund on raspberries. Occasionally it feels like a waste of money when they're requesting an obscure, expensive item that I'm not optimistic about, and I swear, every time the kumquats appear the girls request them, even though I remember that they've disliked them, year after year. But it's a small price to pay for encouraging exploration and adventurous eating.

If you're as old as I am, you may remember those old Coke vs. Pepsi taste tests where members of the public would take a little sip of each soda while blindfolded. We do the same thing in our house, but with vegetables. You might, for example, do a yellow vs. green vs. red pepper taste test, or deconstruct a spring salad mix and have kids compare green leaf, romaine, spinach, and arugua, or -- my favorite -- taste the same vegetables from a supermarket vs. a local greenmarket. This turns the whole process into a game, which can encourage reluctant tasters, but it also helps kids understand that while they may not like every vegetable, there's enough of a difference between vegetables that they should approach new ones with an open mind.

Do my kids eat as many vegetables as I think that they should? Nope.* Come to think of it, though, neither do I. But we don't have battles over food and eating together is fun while we progress together toward more healthful eating with every good choice that we make.

Need more ideas? Check out Vegetables A to Z.

© 2019 Katie Beltramo.
Katie Beltramo, a mom of two, is editor of Kids Out and About--Albany. She also blogs at Capital District Fun.

* This article was written years ago, and now that I have two teens, I'm pleased to report that my kids are genuine vegetable enthusiasts, and they've even embraced many of the vegetables that used to send them fleeing from the room.